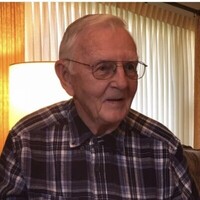 Frankie “Frank” Lee McCutcheon, age 95, of Saginaw, Missouri passed away on Wednesday, March 10, 2021, in Joplin.    Frank was born February 15, 1926, in Saginaw, Missouri to Earl and Ruth (Williams) McCutcheon. He spent nearly all his life in Saginaw, working on the family dairy farm as a young man and, later, building houses on the farm for his family members to remain close by. He graduated from Neosho High School before serving in the United States Army during World War II as a blacksmith and welder. Upon his return, he graduated from Joplin Jr. College then worked as the supervisor of the parts department for the Missouri Department of Transportation for over 30 years, retiring in 1986. Frank was an active member and deacon at Saginaw Baptist Church, then attended Oak Grove Baptist Church where he also served as a deacon.
Frank married the late Maribel Gladman on August 21, 1950 in Bentonville, Ark. Frank and Maribel met while attending Joplin Jr. College then spent 66 years side by side before her passing in 2016. He was also preceded in death by his parents, sister Almeda Brown, brother Cecil McCutcheon, and daughter Belinda Litton.
Frank was a devoted Christian, husband, father, and trusted friend. A humble and gentle man, Frank was a loving constant in the lives of many friends who came to be family. Throughout his life, Frank championed those in need. His time and energy was in service to those around him who needed a hand, an ear to listen, or a hug. He enjoyed spending time with family and friends, volunteering through his church and charities, and working on his land.
Survivors include his daughters, Vicki Anderson, Cheryl McCutcheon, and Renee McCutcheon all of Saginaw; Elizabeth Rhines and husband Mark,of San Antonio, Texas; Rachael Johnson and husband Kelly of Welch, Oklahoma; eight grandchildren; and ten great-grandchildren
A graveside service with full military honors will be held at Ozark Memorial Park Cemetery for family. Reverend Alan McCamey will officiate.
Arrangements are under the direction of Parker Mortuary.