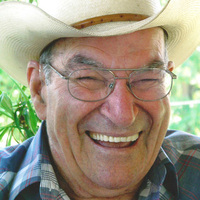 Tom was a rare person who possessed the courage to live life exactly as he chose to live it, with no apologies and no regrets.  He was neither rich nor famous, nor did he wish to be.  His wife of fifty-five years, and his dearest love, said she never knew a man who wanted children more than Tom did; and the two of them provided a stable loving family home for their four children.  Tom would make toys for his children – things like stilts and rubber band guns and pole-vaulting setups.  And he was always willing to get down on the floor and play or wrestle.  He taught every one of them to ride horses.

He often said, “I’m a working man and I’ve worked my whole life,” and it was true.  He had a talent for sales, working on a bread route, first with his father from whom he learned many tricks of the trade.  He worked for several bread companies, as a manager of a small loan company, and as an insurance salesman.  But though he enjoyed financial success as a salesman, he found his true calling was to work with both his head and his hands.  So, he became a maintenance man at Eagle Picher in Galena, KS, and spent several decades in this profession for companies in and around Joplin, MO.  To his mind, there was no better way to make a living.

Even so, the period of his life that had the greatest impact on Tom, was when he was Marine.  They say, “Once a Marine, always a Marine,” and if it was ever true of anyone, it was true of Tom.  He enlisted the second he was old enough to do so, and still was required to have his mother sign for permission.  He was seventeen.  He served in Korea as a truck driver during the Korean War and received the Purple Heart, an honor he declined because he considered his injury insufficient to merit such recognition.  Nevertheless, he was proud of his service, and the memories of his time there stayed with him all his life.  Anyone who knew Tom heard him tell his stories – and his children know them by heart.

Tom loved telling his stories, but he loved the outdoors even more.  Here was a man who cherished giant oak trees and tiny wood violets in equal measure.

Because whatever Tom loved, he loved with a passion.

Tom was preceded in death by his wife, Mary Katherine (Lundstrum) Barwick, his parents, Argle and EttaMae (Kelley) Barwick, and his brother Dick Barwick.  He is survived by his children:  Melissa Nelsen (husband Loren) of Climax Springs, MO, Tommy Gene Barwick II (wife Michelle) of Seneca, MO, Tim Barwick (wife Rosella) of Joplin, MO, and Todd Barwick (wife Shelly) of Neosho, thirteen grandchildren and twenty-five great grandchildren – all of whom will miss his hugs and his laughter.