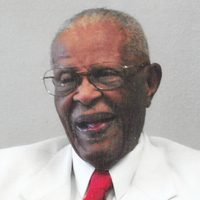 \Rev. Henry M. Pullum, Sr. saw the lights of glory and peacefully transitioned into rest on the evening of April 29, 2020. He was surrounded by his family who loved him very much. Born on August 27, 1917 to Rev. Henry James and Georgia Pullum in Frederick, Oklahoma and although the family moved around Neosho, Missouri was home. There God led him to Mrs. Croudis and Mrs. Evans along with their families who helped in raising him after his mother passed away when he was eight years old. He attended and graduated from Lincoln High School in Neosho where he was active in sports. Playing basketball and running track.

Henry accepted the Lord at a young age and always loved going to church. He was never a bench member but a worshipper. You could hear him say “Amen belongs there!” pushing whomever was preaching the Word. He was instrumental in several singing groups; the Five Star Gospel Singers and The Gospel Five. He loved to sing and give God praise. He often said that he belonged to a noisy crew. He shouted when he got happy that’s what we good Christians do. Rev. Pullum was known for singing How Great Thou Art, Do You Know Him? and Because He Lives to name a few. Although he loved singing God had more for him to do and that was to preach the Word. Henry was called to the ministry in 1952, and after being ordained he served as Interim Pastor at the Unity Baptist Church. Henry also served as pastor at the Mount Olive Baptist Church in West Plains, Missouri and served fourteen and a half years as  pastor of the Mount Hebron Baptist Church in Pittsburg, Kansas. While pastor at Mount Hebron Henry was also involved in the Southeast District of Kansas as the Pastor Counselor for the district Ushers.  Being a gospel preacher and baptizer for many years Rev. Pullum always inquired about an individual’s salvation every where he went. In 1942 he was told that he had to get into defense work going to the shipyards of Oakland California leaving a son Ronald Leeroy Pullum. He made God a promise that if He would keep His arms around his son, that he would be kind and encourage every young person he met and that he did. A lover of young people Rev. Pullum rarely missed sporting events at Memorial High School, Joplin High School and Missouri Southern State University where he was affectionately known as “Rev”. Seeing how he loved the game of basketball Coach Jim Frazier made it possible for him to have seats behind the Lions team at every game. Rev Pullum is also in the Hall of Fame at MSSU for being The Most Loyal Fan. Henry was very active in sports playing softball, bowling and golfing until he was 90 year old. He was known as “The Hammer” on the domino table winning tournaments on the senior level as well as shooting pool.

Henry was a member of Mrytle Lodge #149 F&AM Prince Hall Masonry. He was a Gold Card member of the masonry family because of his age and the number of years of membership 25+ years. He was a Past District Deputy Grand Master, Past Worshipful Master, Past Grand Chaplain and Past Worthy Patron of the Order of the Eastern Star. Henry also served as a reserve police officer with the Joplin Police Department.

The Bible says, “Whoso findeth a wife findeth a good thing, and obtaineth favour of the Lord.” On December 24, 1959 Henry married Ollie Mae Hildreth and obtained favor of sixty years. They attended those sporting events together along with participating in Bible Study, Sunday School, Adult Choir, and Sonshiners at Calvary Baptist Church where they are members.

God allowed more favor in letting Henry hear his son Ron preach his licensing sermon, his daughter Deborah preach her licensing sermon and attend her ordination, and hearing his grandson Terryle give the youth sermon at Calvary Baptist Church. Henry leaves a legacy of preachers to the seventh generation.

Henry was preceded in death by his parents, his brothers, James, Jerome, Arthur and his sisters, Gladys, Odessa, and Geraldine. His son, Ron, and his God given sister, Betty Martin.

Along with his wife, he is survived by his children, Deborah Powell of Petersburg, Virginia, Joyce Pullum of Dallas, Texas and Henry Pullum, Jr. of Joplin, Missouri. He is also survived by his daughters in love, Lola Pullum of Jefferson, Texas and Maniya Pullum of Joplin, Missouri. His grandchildren, Stephen, Keith, AJ, Anthony, Justice, Terren, Terryle, Aeryn, Aisya, Tajee, MyJournie, and MarQuon. 20 great-grandchildren, 6 great-great-grand children. His brother, Leroy Pullum (Betty), of Palmdale California. A host of nieces and nephews and young people that refer to him also as Dad and Granddad.

If I can help somebody as I pass along. If I can bring back beauty with a word or song. If I can show God’s message to a world gone wrong, then my living shall not be in vain.

A Masonic Service will be held for Bro. Henry on Monday, May 4, 2020 at 6:00 p.m. at Parker Mortuary Chapel with family to see friends after.

Funeral service will be Tuesday, May 5, 2020 at 11:00 a.m. at Calvary Baptist Church with Pastor Samuel Nero and Dr. Phillip McClendon officiating. Interment will follow in Ozark Memorial Park Cemetery with grandsons serving as pallbearers.

Please be courteous towards family and friends, and practice safe distancing during these times. Thank you.