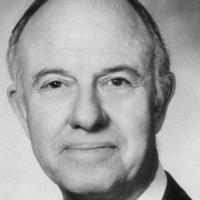 Bob was born March 8, 1922 in Joplin, son of the late Elmer Joe Higgins and Minnie Smith Higgins. He graduated from Joplin High School, then graduated from Joplin Junior College in 1942. He married Gertrude Beatrice “Bea” Cantrell on January 2, 1942 in Columbus, Kansas. He attended the University of Missouri in Columbia, but enlisted in the United States Army Air Corp prior to graduation, and served as a flight instructor for B-17 and B-24 fixed wing air planes.

After his military service concluded in 1945, he returned to Joplin where he went to work for the local post office as a letter carrier. Over the years he worked his way up to Post Master in 1973, before retiring in 1986. He was proud of his nearly 44 years of public service. He was instrumental in getting the Post Office moved from 16th and Main to its current location at 32nd and Main in Joplin.

Bob was very involved with local community affairs. He joined the Freeman Healthcare System as a board member where he served for many years. He was very involved with the Children’s Miracle Network. He served on the Board, and was instrumental with raising funds and starting a local chapter. Because of his efforts, the local building is named Bob Higgins Medical Center. He also started an annual golf tournament to raise funds for CMN, which he ran for 21 years.

He loved Missouri Southern State University, and was very active in fund raising for the school. He was proud to be the longest member of the Lionbackers, being the first person to donate to the Lionbackers in 1968, was a long time contributor to the Missouri Southern Lantern Society, active in getting the fundraising for the first artificial-turf football field, aided in getting a bond issued for the Taylor Auditorium, campaigned for funds for Webster Hall, and Leggett & Platt Athletic Center. He also has the Bob and Bea Higgins Nursing Scholarship to help nursing students. He was a regular at many football and basketball games for many years. He served on the Joplin Family Y board, and was a longtime member, even going there several times a week at the age of 95. He was also known for his gardening skills which he credited to his upbringing, he was known to have up to 100 tomato plants, and he loved sharing his crop with many appreciative friends and family.

In addition to his parents, Bob was preceded in death by his wife of 71 years, Gertrude Beatrice “Bea” Higgins, who passed away December 4, 2013; a granddaughter, Amy Higgins, daughter-in-law, Lindy Beauregard; and a brother, Charles Higgins.

Bob will be interred next to his wife at Ozark Memorial Park Cemetery with private graveside services. Friends are welcome to come by Parker Mortuary for viewing and to sign his book during business hours Sunday through Tuesday, April 5 -7th, with established social distancing protocol in place.

A Celebration of Life for Bob will be held at a later date.