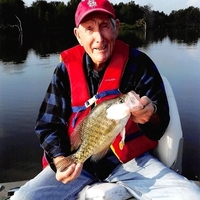 Jay entered this life on June 10, 1931, in Joplin, Missouri, son of the late Luther John and Cecil Josephine (Brown) Farris. He was raised in Joplin and was a 1949 graduate of Duenweg High School. On January 29, 1950, he was united in marriage to Fayenell Goade and to this union three children were born. Jay served his country faithfully in the United States Army during the Korean War, returning home to Joplin after his honorable discharge in 1953. At age twenty-nine, Jay answered the call to preach, promising God that if he made it home from Korea he would do so. He served six churches as Pastor, retiring in 2018. He enjoyed crappie fishing, watching baseball and storytelling.

He was preceded in death by his parents; two brothers, Gene and his twin Ray; three sisters, Alice VanAmber, Mary Vaughn and Thalia Brock.

Jay is survived by his wife of seventy years, Fayenell Farris of the home; three children, Johnny Farris and wife, Linda, of Carl Junction, Patricia Ochoa and husband, Jesse, of Webb City and Stephen Farris and wife, Bobbi, of Bolivar; seven grandchildren; several great grandchildren; as well as a host of other family and friends.

Graveside services with full military honors will be held on Tuesday, March 31, 2020 at 2:00 p.m. at Ozark Memorial Park Cemetery in Joplin, Missouri with Rev. Stephen Moser officiating. Friends may pay their respects on Monday from 9:00 a.m. until 7:00 p.m. in the chapel of Parker Mortuary. Arrangements are under the personal care and direction of Parker Mortuary.