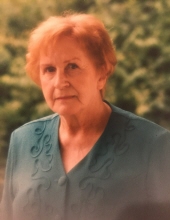 Gertrud entered this life on December 28, 1926, in Gersfeld, Germany, born to the late Kurt and Helene Bressel. She was raised and attended school in Germany. On April 8, 1954, in Germany, she was united in marriage to a young serviceman, Jimmie James. They left Germany in the early 1960’s and moved to Pineville, Missouri. Besides being a homemaker, Gertrud worked several years as a CNA, retiring in 1996, from Concordia Care Center in Bella Vista, Arkansas. She enjoyed cooking, caring for her animals, crocheting, knitting and spending time with her grandchildren. She was a member of the Noel Church of Christ.

She was preceded in death by her parents; her husband, Jimmie James on January 26, 1985; three children, Glenna, Jesse and Kurt James; two grandchildren, Robert William Stark and Lesley James; and a brother, Robert Bressel.

Gertrud is survived by her three children, Maria Regier of Springfield, Missouri, Karin Stark of Southwest City, Missouri and Denise Rawls and husband, John Payne, of Bella Vista, Arkansas; thirteen grandchildren; several great-grandchildren; one great-great-grandson; as well as a host of other family and friends.