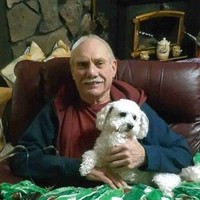 Larry David Staples, age 72, Joplin, passed away Monday, November 25, 2019 at his home after an illness.

Larry was born August 20, 1947 in Mattoon, Illinois to the late Dale and Gladys Staples.

The family moved to West Covina, California, where he attended school.  He met and married the love of his life, Peggy Stokes, on July 17, 1967.  They moved to Joplin in 1970.

Larry worked for Missouri Steel Castings for over thirty years.  He worked for Darrell Kidd Pest Control for eleven years, retiring in 2016.  He then started Staples Pest Control February of 2019, working alongside his son.  Larry was a veteran of the United States Army, serving in Germany during 1967-69.

Larry was a devoted Kansas City Chiefs fan.  He loved watching the games with his family.  He will be missed by everyone that knew him.

In honor of Larry, the family would love for everyone in attendance to wear their favorite Kansas City Chiefs gear.