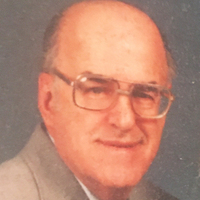 Milton was born December 12, 1923 in Rock Springs, Wyoming, son of the late John Sneddon from Scotland and Hannah Wales Sneddon from England.  He grew up in Tacoma, and he graduated in 1942 from Stadium High School, Tacoma, Washington. He served in the United States Army Air Corp during World War II as a Control Tower Operator, and was in the 11th Flight Control Squadron in Alaska.   He then went to Fort Hayes State College, Fort Hayes, Kansas where he earned a Bachelor’s Degree in 1950; and in 1958 he earned a Master’s Degree in Social Work from the University of Kansas, Lawrence, Kansas.  In Kansas he worked as a County Social Worker, Assistant Director in the State Department of Aging, Field Representative in the State Department of Social Welfare, and as Chief Social Worker at Parsons State Mental Retardation Training Center.  He moved to Joplin in 1966, and he was on the first team of three administrators to develop the state-wide system of regional centers in Missouri to serve developmentally delayed children and their families. He served as director at the Joplin Regional Center until his retirement in 1988.

Milton was an active member of the National Association of Social Workers.  He  volunteered with St. John’s Regional Center Auxiliary and as an Area on Aging Ombudsman; and he served as Board member with the Joplin Workshops.  He was also a member of First United Methodist Church of Joplin, and the Joplin Kiwanis Club.

In addition to his parents, Milton was preceded in death by his wife of 70 years, Fayne Amstutz Sneddon; a grandson, Jack; and brothers Robert Burns Sneddon and John Haig Sneddon.

Milton was a steadfast and loving father, and he was always proud of his children’s accomplishments and their families. All three of his children survive, Steve Sneddon (sports writer) and wife Carol of Parsons, Kansas, Janet Gorden (school psychologist) and husband Phil of Mesquite, Texas, and Patricia McKinney (speech therapist) and husband David of Sedalia, Missouri; grandchildren, Christine McKinney of Sedalia, Erin Gorden and Emily Gorden both of Mesquite, Texas, and step-grandchildren Todd McKinney and wife Gina, and Michelle Wichterman all of Panama City, Florida; step-great grandchildren, Madison Wichterman, Matthew Wichterman, Lillian McKinney, and Reece McKinney.

The family will receive friends at Parker Mortuary on Friday from 4:00 to 6:00 p.m.

The family requests that memorial contributions be made to First United Methodist Church of Joplin.