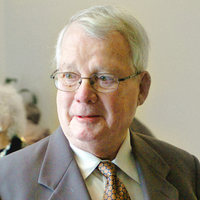 William Robert “Bob” Corley, 98, passed away Friday, Sept. 6, 2019, at Mercy Hospital Joplin after several years of declining health. Bob was born Jan. 6, 1921, in Plymouth, Illinois, to the late William Corley and Alta Fern (Heaney) Corley. When he was a child, his family moved to Kansas, where he graduated from Columbus High School.

Bob was a World War II veteran. Following high school, he served three and a half years in the U.S. Air Force 6th Bomber Command as a tech sergeant. His tour of duty included service in the Panama Canal Zone. He later attended the University of Southern California, Los Angeles, with the help of the Servicemen’s Readjustment Act of 1944 (popularly known as the G.I. Bill). He graduated in 1948 with a degree in Business Administration.

It was in Joplin that he built his wealth and where he became one of Joplin’s most philanthropic citizens. He felt that since he made his money in Joplin he would give back to Joplin, and he did so through a lifetime of charitable giving. His gifts touched numerous organizations in the Joplin area, and several entities bear his name.

Bob was one of Missouri Southern State University’s largest benefactors. William Robert Corley Auditorium on the MSSU campus is named after him, as is the university’s William Robert Corley Dental Hygiene Clinic. His generosity touched nearly every department, including the theater and music departments. He was a longtime supporter of the Missouri Southern International Piano Competition. He donated a grand piano and also provided band uniforms to MSSU. He was proud to establish the William Robert Corley Scholarship Fund, which will assist students for many generations to come. He also supported endowed professorships in accounting and marketing.

Hospitals in the Joplin community also were recipients of generous gifts. He supported the Mercy Health Foundation and Mercy Hospital Joplin’s effort to rebuild after the May 2011 tornado. Mercy’s gift shop also bears his name.

Other area charitable organizations close to Bob’s heart include: Lafayette House, Salvation Army, Special Olympics, HOPE 4 You Breast Cancer Foundation, Spiva Center for the Arts, Joplin Little Theatre, Joplin Humane Society and Connect2Culture. Bob’s giving will not end with his passing. He had in place a perpetual charitable trust that will continue to fund charitable causes he held dear.

Bob traveled extensively, and in his lifetime he visited many countries — England, Greece, China and Brazil, to name a few. Word has it he loved to dance — especially the rumba! He had an engaging wit and, even into his final days, a sharp mind. He was quite computer-savvy and had a remarkable ability to remember dates, places and details of events from many decades past. His stories were always fact-filled and interesting. He was a member of Joplin’s First Christian Church and Money Makers Investment Club, and he enjoyed attending the monthly luncheons of the 55+ Lunch Bunch at Joplin’s First United Methodist Church. He will be incredibly missed by all who knew him.

Bob is survived by a brother, John Edward Corley, of Grove, Oklahoma, and three nieces: Sandy Allen (Tom), of Hot Springs Village, Arkansas; Candy Livengood, of Augusta, Kansas; and Shelly Vail (Joe), of Round Rock, Texas. He is also survived by several great- and great-great nieces and nephews and longtime friend Gene Hays, of Joplin. He was predeceased by a sister, Janice Small, of Augusta, Kansas, and a niece, Debby Cornwell, also of Augusta, Kansas.

A memorial service will be held Friday, September 27, at 2:00pm in Corley Auditorium, located in Webster Hall on the campus of Missouri Southern State University in Joplin. Immediately following, there will be a reception in the Spiva Art Gallery, adjacent to Webster Hall. Private interment will take place at a later date at Ozark Memorial Park Cemetery in Joplin. Cremation arrangements are under the direction of Parker Mortuary.