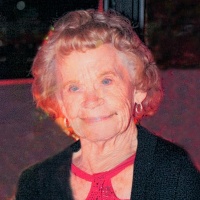 Marjorie was born December 18, 1925 in Mildred, Kansas, daughter of the late John Warren Fitzgerald and Ruby Rae Casteel Fitzgerald.  She grew up in Picher, Oklahoma, and graduated from Picher High School.  She married Jack G. Nichols in 1946, and the couple lived in Joplin, and then moved to Miami, Oklahoma in 1963. She worked for the Gas Service Company in customer service in both Joplin and Miami.  She was involved with the Modern Mother’s Club of Miami.  They returned to Joplin in the late 1980’s.  She was a member of the  First United Methodist Church of Joplin, and the Kum D’Bl Sunday School Class.   She enjoyed her time volunteering at Freeman West Hospital for many years.

In addition to her parents, Marjorie was preceded in death by her husband, Jack Nichols, on February 8, 2011.

Family graveside services will be at Ozark Memorial Park Cemetery with Pastor Marsha West-Eichler officiating, and family serving as pallbearers.