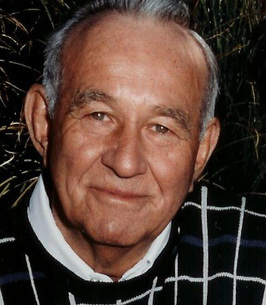 Ewin Elvis Robertson, age 88, of Joplin, passed away on March 29, 2019, following a long fulfilled life. Ewin was born on a farm near Council Hill, Oklahoma, the son of the late John Franklin and Ellen Agnes (Biggers) Robertson. He was the youngest of seven living children, all of whom attended college. As a young man, he learned the meaning of hard work while growing up on the family cotton farm. Though he worked hard he also played hard. He was an accomplished basketball and baseball player, and fully believed he could beat about anybody on any given day.

He received his Bachelor’s Degree in physical education and mathematics from Oklahoma State University. He began his teaching and coaching career in Hitchita, Oklahoma. Where he had many state championship basketball teams. He also coached baseball and softball. In January of 1956 he was drafted into the Army. At the time he was drafted, he was coaching the high school boys basketball team that went on to win the state championship without him. His Army tour took him to Germany where he was a member of special troops and coached the Seventh Army Basketball team that traveled all over Europe winning games.

On May 29, 1954, prior to his time in the Army he married the love of his life, Helen H. Hicks. Together they raised two daughters. They moved the family to Duenweg, Missouri in 1958. Where Ewin became the principal, math teacher, coached basketball and baseball at Duenweg High School. In 1964, he graduated with his Master’s Degree in mathematics from Pittsburg State University. Following the closing of the Duenweg High School, he taught at Diamond High School from 1965 to 1986. After retirement he taught mathematics at Missouri Southern State University from 1986 to 1994. During that time, he also sold real-estate for Pro 100.

Ewin and Helen built their first home in 1961 with three other family homes to follow. They went on to build several spec homes and homes for both of their daughters. He enjoyed collecting antiques and going to local auctions. He loved playing all types of cards and dominos. He was an avid OU Football and St. Louis Cardinal Baseball fan. He was his grandchildren’s number one fan, never missing any of their sporting events.

Ewin was a founding member of the 26th & Connecticut Church of Christ, where he taught many Sunday school classes and Bible studies. He served several years as an Elder. He instilled and preserved the Christian values of his family.

He was preceded in death by his wife of fifty-nine years, Helen Robertson; two sisters, Lois Pruitt and Thelma Branch; and three brothers, Spellman Robertson, J.F. Robertson and Herman Robertson.

Funeral services will be 11:00 a.m. Wednesday at Mason-Woodard Chapel. Entombment will follow at Ozark Memorial Park Mausoleum. The family will receive friends 6-7 p.m. Tuesday at the mortuary.

Memorial contributions may be given to Camp Soroptimist or the 26th & Connecticut Church of Christ in care of the mortuary.