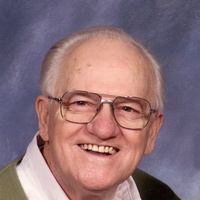 Charles Edward Gibbons, age 92, Joplin, passed away on Tuesday, March 19, 2019 at his home after a lengthy illness.

Charles was born September 23, 1926 in Carthage, Missouri, son of the late Dean Gibbons and Sylvia Conley Gibbons.  He served in the United States Navy during World War II, and was a member of American Legion Post #13.

He worked for the Joplin Globe for over 50 years, retiring as the City Editor.  While with the Globe he also wrote a column, “Angling in the Archives”.  After retirement, he published two books under the same name.        He and his wife, Doris, were active volunteers for St. John’s with Prestige.  They enjoyed helping others by volunteering for several local charities, and had a popcorn maker that they took to many fund raisers where they were known as the ” Popcorn King and Queen”.  They were chosen as winner of the Health Care Heroes for volunteer division in 2009.  He was also a member of St. Peter the Apostle Catholic Church.  The couple enjoyed traveling with Prestige and SMB Lifestyles, and attending plays at the Joplin Little Theatre, Stained Glass, and the Carthage Stones Throw Theatre.

In addition to his parents, Charles was preceded in death by his wife of over 60 years, Doris, who passed away on November 4, 2010, a son, Richard Gibbons, a daughter, Teresa Gibbons, a brother, James Gibbons, and two sisters, Emma Harris and Erma Dean Chapman.

Survivors include his son, David Gibbons of Joplin; and a brother, Frank Gibbons of Stockton, California; several nieces and nephews.