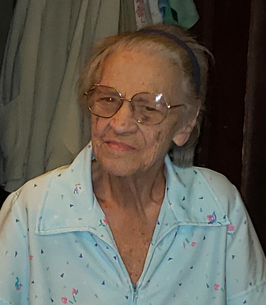 She was born in Quincy, Illinois on August 27, 1935 to Clarence Courtney and Martha (Knight) Courtney. She started her life in the Moberly, Missouri area but later moved to Arkansas where she and her sister grew up with their mother and step-father. She married William A. King on August 3, 1950 when she was just fourteen years old, and after a year of marriage, became a mother to her first baby at just sixteen. When Bill joined the Air Force, she followed him to his duty stations across the country, but came back to Joplin when he retired, and she lived in the same house for almost fifty years. She worked as a housekeeper, and worked at some manufacturing jobs, but most of her life she was a housewife and mother, her favorite jobs. She had a love for animals, and most recently her little chihuahua, Daisy. She would do whatever she could for anyone, and often came close to giving others the shirt off her back. She loved playing games when she could find others to join her.

She is survived by her daughter, Billie Jean and husband Jerry Patterson; a son-in-law, Ivan Brock; three grand-sons, Kevin Patterson, and wife Lisa of Carthage, Kenneth Patterson, and wife Julie of Joplin, and Keith Patterson of Joplin; thirteen great-grandchildren, and one great-great grandchild. She also had two nieces, Glenda Gary and Darlene Robin of Opalousas, Louisiana.
She was preceded in death by her husband of fifty-nine years, William A. (Bill) King; her son, David Ray King; one daughter, Carol Sue King Haddock Brock; and a sister, Margaret Babineaux.