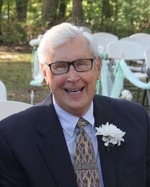 Louis Edward Kelley, age 82, of Joplin, passed away on Sunday November 18, 2018 at his home. Mr. Kelley, son of John Clarence and Grace (Guy) Kelley, was born on September 17, 1936 in St. Joseph, Mo. Louis attended school in St. Joseph graduating from Lafayette High School and Missouri Western College. He then enlisted in the United States Army serving his country honorably. On September 1, 1961 he was united in marriage to Sharon Patzwald in Leavenworth, KS. She preceded him in death in 1982. Louis was employed most of his life as the manager for the Division of Employment Security, starting in St. Joseph and being transferred to the Joplin office in 1967. He retired in 1994 after over 32 years of employment. He was later united in marriage to Peggy Arthur Connors in December of 1985 in Joplin. Louis loved to enjoy life and was an avid outdoor enthusiast. Louis will be remembered for many qualities as funny, personality, love in his heart for his wife, family and friends. He was a great story teller, mischievous, determined, and a great friend. He was an active member of the First Community Church of Joplin.

Funeral services will be held on Tuesday November 20th at 11:00 am at the Mason-Woodard Mortuary with burial at Ozark Memorial Park with Reverend Russell Willoughby officiating. The family will receive friends at 10:00 am until service time on Tuesday.