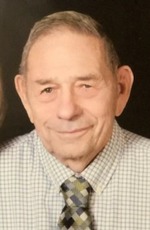 Jack Eugene Butterfield, age 86, of Neosho, Mo, passed away on Sunday, October 28, 2018 at the Missouri Veterans Home in Mt. Vernon, Mo. Mr. Butterfield, son of Clyde E. and Alyce (Joachim) Butterfield, was born on October 12, 1932 in Ainsworth, NE. On August 2, 1953 he was united in marriage to Joan Hagen in Lincoln, NE. She preceded him in death in 1993. Jack grew up and went to school in Nebraska. In 1951 he enlisted in the United States Navy and served his country honorably. After the military, he was employed with the Nebraska Department of Transportation. In 1957 Jack transferred from Nebraska to the Missouri Department of Transportation. He was employed with MODOT until his retirement in 1988. On April 2, 1994, in Neosho, Mo Jack was united in marriage to Roselle Hofstetter Charles. She survives. Jack was a Mason and a member of the Royal Heights United Methodist Church in Joplin.

Survivors include his wife, Roselle Butterfield, of Neosho, Mo.; two daughters, Nancy Tomlinson and her husband David, of Shawnee, Ok, and Karen Stone and her husband Jeff, of Edmond, OK; two stepchildren, Dawn Charles of Moore, OK, and Jeffery Charles and his wife Crystal, of Monett, Mo.; one brother, William Butterfield, of Galena, Mo; one sister, Susan Lewis and her husband Wayne, of Lincoln, NE; nine grandchildren, Shelby Stone, Kyle Stone and his wife Mallory, Sage Sullivan and her husband Trevor, Malory Tomlinson, Zachary Charles and his wife Shaya, Alexander Charles, Courtney Charles, Christopher Rush, and Joeli Rush; and three great-grandchildren, August Rush, Danika Sullivan, and Harper Sullivan. In addition to his parents and first wife Joan, he was preceded in death by one daughter, Laura Butterfield, on September 5, 1995.

Funeral services will be held on Saturday, November 3, 2018, at 10:00 a.m. at the Royal Heights United Methodist Church in Joplin. Burial with military honors will follow at Ozark Memorial Park Cemetery. The family will receive friends on Friday, November 2, from 6:00 p.m. until 7:00 p.m. at the Mason-Woodard Chapel in Joplin. Memorial contributions may be made to St. Jude’s Children’s Hospital or to the Royal Heights United Methodist Church in care of the mortuary.