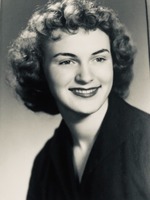 Patricia Eve “Patty” Beard, 83 of Joplin, Missouri passed away Thursday, October 25, 2018. Patty was born in Joplin on April 26, 1935 to Edgar and Ethel Hughes. She graduated from Joplin High School and attended Junior College. On December 4, 1954 she was united in marriage to Don Beard. Together they owned and operated Don’s Government Surplus, DL Beard Cattle and Sarcoxie Livestock. When Patty was not helping her husband with business operations, she enjoyed spending time with her family. He preceded her in death on May 26, 2006.

In addition to her husband and parents, Patty was preceded in death by two brothers and a daughter, Cathy Dooley. She is survived by her son, Jeff Beard and wife Karen of Midland, Texas; six grandchildren, Megan Beard- Schilder and her husband Bryan, Nick Beard and his wife Caity, all of Midland, Texas, Ryan McGeehee, Brittney McGeehee, Candace McCohhahey and her husband Cody and Patrick Jennings, all of Neosho, Missouri; and seven great-grandchildren.

Memorial services will be held at 2:00 PM on Tuesday, October 30, 2018 at Mason-Woodard Chapel with Pastor Scott Pogue officiating. Private burial will be held at a later date at the Ozark Cemetery.