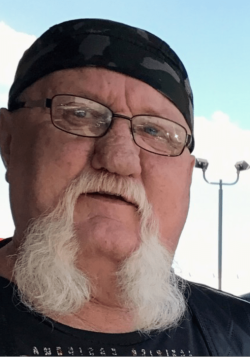 Danny Joe Steele, age 62, of Joplin, passed away on October 23, 2018, after a short battle with cancer. He was born June 18, 1956, in Joplin, MO to Clifford J. and Shirley A. (Witmer) Steele. He spent most of his life in the Duenweg and Joplin area. Danny worked at Walmart for 16 years. His most recent role was that of a Greeter, a job that he truly enjoyed and worked at until, due to his illness, was unable to continue.

Danny is preceded in death by his father, Clifford. He is survived by his mother, Shirley; brothers, David, and wife Diana, of Joplin, and John, and wife Linda of Chaparral, NM; daughter, Sherryl and step-daughter, Cara Higginbotham; and step-son Michael Thompson and wife Yvonne; and six grandchildren, Taevyn Steele, Tehya and Samuel Higginbotham, Ashlyn, Brianna, and Gabriella Thompson, who are his pride and joy.

A celebration of life will be held at The Sheep Shed in Neosho, on Monday, October 29th at 1:00 PM.

In lieu of flowers, donations for Danny’s medical expenses may be made to Danny Steele Fund, c/o Community Bank and Trust, 414 E 32nd Street, Joplin, MO, 64804.