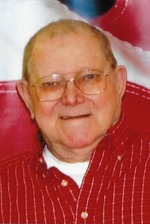 Sam was born on January 27, 1933 in Green County, Iowa, the son of the late Frank S. and Ethel G. (Morlan) Kinkennon. At the age of seventeen joined the United States Army and was a veteran of the Korean War, attaining the rank of Corporal. He married his first wife Charlotte and together they had two sons. He moved the family to Colorado Springs, Co. where he worked as a small appliance repairman and built and raced stock cars. Later he drove a truck across the country putting up canopies for gas stations. In 1968 he met and married his second wife Edna and gained his daughter. He then began working as a serviceman for Union Gas Company while living in Joplin then moving to Carl Junction, Mo. In 1981 he moved to Ramona, Ok. where he became Plant Manager of Synergy Gas, formerly Union Gas until his retirement. He loved sewing with his wife Edna. He enjoyed fishing, bowling, pool tournaments, and fixing small appliances and mechanics.