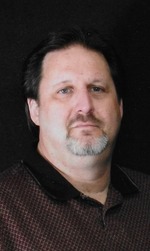 John David Cruzan, age 54 of Joplin, Mo. passed away early Tuesday, May 15, 2018 at his parent’s home from a motorcycle accident.
John was born on April 9, 1964, in Joplin, the son of David and Carol (Pfifer) Cruzan. He has been a lifetime area resident. John graduated from Parkwood High School in Joplin. John was a Paramedic Supervisor for Newton County Ambulance and later he went on to work for the Joplin Globe for many years before illness forced him to retire. He enjoyed playing guitar and riding motorcycles.
He is survived by his parents, three sons; Matt Cruzan, Kyle Cruzan and Nathan Cruzan, all of Joplin, a sister; Janet Showers of Joplin, a niece and nephew. John was preceded in death by a sister, Linda Cruzan.
Services have been scheduled for 2:00 p.m. Friday, May 18, 2018 at the Mason-Woodard Chapel. Burial will follow at Ozark Memorial Park Cemetery.
Arrangements have been entrusted to Mason-Woodard Mortuary & Crematory.