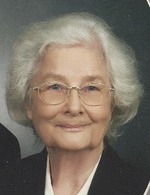 Ina Jean Strobel, age 90, of Joplin passed away this past Tuesday, May 15th. She will be greatly missed by her husband of 70 years, Arthur L. Strobel. Ina was born in Advance, Missouri on August 24th, 1927. She married Arthur on November 28th, 1947. They lived numerous places in Missouri until settling in Joplin in 1963. She is the daughter of Ellis and Ophelia Murphy both deceased. Surviving are her daughter, Barbara Armstrong, of Excelsior Springs, Missouri and a son, Forrest Strobel of Rolla Missouri and his wife Carol. She also has two surviving grandsons: Matthew Strobel of Fort Worth Texas and Luke Strobel of New York City, New York. Two sisters also survive: Helen Wright of Fort Worth, Texas and Faye Ghannon of Mesa, Arizona.
Ina will be remembered as a very caring and loving woman especially by her children and grandchildren. Ina loved to cook and prepare meals for her family and will be remembered for her Holiday dinners. Being a Christian woman was extremely important to Ina and she was a longtime member of the Mount Hope Church of Christ in Webb City, Missouri.

Ina completed her Bachelor of Education Degree at Missouri Southern State College and was a substitute teacher for several years prior to becoming a librarian at Joplin Public Library, where she was employed until retirement. During her life she was involved in a number of volunteer activities: 4H clubs, Freeman Hospital Women’s Auxiliary, and World Bible Studies. In her later years she became very interested in birds and became a member of the local Chapter of the Audubon Society.

Visitation will be at Mason-Woodard Chapel from 1:30pm to 2:00pm on Monday, May 21st. Services to follow. Frank McReynolds, Minister, will be officiating. Entombment will follow at Ozark Memorial Park Cemetery. Arrangements have been entrusted to the Mason-Woodard Mortuary of Joplin, Mo.