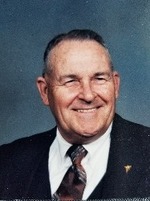 Charles R. (Chuck) Edwards was born Feb 18, 1930 in Columbus, KS to Elbert and Irene (Bond) Edwards. He was the second born of six children. His family moved to Joplin, MO in 1935, and he considered it home from then on.

Chuck graduated from Joplin High School in1948, Southwest Baptist College (University) in 1955, and then on to graduate from Quachita Baptist College (University) with a B.S. degree and was commissioned to 2nd LT, Field Artillery, Reserve in 1957. Chuck was a student at Southwest Baptist Seminary in Ft. Worth, TX. He was called to preach in late 1950 and preached until his retirement from ministry in 2001.

In 1951, Chuck was drafted into the Army (Korean War) and became a paratrooper in the 508th Airborne Regimental Combat Team. Chuck had several duty stations around the world with two 39 month services in Germany and 13 months in Korea with the United Nations. He also served 1 month in combat in Vietnam with the 1st Battalion, 92nd Artillery (155 medium artillery). In the highlands, receiving 4 Battle Stars and the Bronze Star medal. Chuck retired in 1976 from the U.S. Army, Major Field Artillery. After military retirement, Chuck began his full-time pastoral duties and pastored various South Baptist churches in need as well as Conner Avenue Baptist Mission. He is a member of Southern Baptist Church of Chestnutridge.

Chuck is survived by his granddaughter, Stephanie Sheldon and her husband Kent, great-granddaughters Abigael and Alicen of Chicago. His son Bill Edwards of Joplin. One brother Mike Edwards of Kansas City. He was preceded in death by his wife of 64 years Shirley, his parents, sisters Verda Gough and Donna Rudolph.His brothers Jerry and Jim.