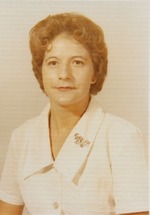 Ramona was born on September 17, 1938, in Joplin the daughter of the late Clarence and Chloe (Steele) Mitchell. She has been a lifetime area resident. She worked at Grandpa’s, she was also a cook for West Central Elementary School and East Junior High School. She worked thirty years for Bagcraft of America. She was a Baptist.

She was preceded in death by a step-son, Jerry Dellheim; three brothers, Floyd McKinney, Clarence Mitchell, and Richard Mitchell; one sister, Aloha Ruth; and a grandson, William Louie Owens, II.

Graveside services will be 2:00 p.m. Friday at Ozark Memorial Park Cemetery. Randy Steele will officiate. The family will receive friends 12:30 p.m. to 1:30 p.m. at Mason-Woodard, prior to the service.