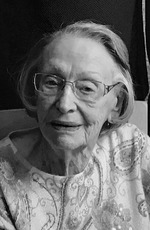 Mary Alice Brown was born April 9, 1924 to Roy and Clara Kircher of New Franklin, Missouri. She was a graduate of Hickman High School in Columbia, Missouri. She married Billy T. Brown on October 3, 1942. They were married for 59 years until his death in June of 2001. As a young adult she became a member of Oakland Christian Church in Columbia Missouri. She had four siblings including, Leroy Kircher, Jr., Allen Kircher, Irene Hardin, Maxine Kinder all deceased from the New Franklin, Missouri area.

She served many years with the Boone County Extension as Council President, Homemakers Council, Strawn-O-Lite Extension Club, State Board of Homemakers Clubs and District Director. In 1981 the name of the organization was changed to Missouri Family and Community Education Association. She was a member of this organization for over 55 years. Mary Alice was a member and past president of Gnosis, FCE Club in Joplin, Missouri. She also helped to organize this club and was named State Treasurer of the Missouri Family and Community Association of the Foundation and later became Honorary Director. She was a member of various other organizations including Rockbridge High School PSA and Central Methodist University’s Mother’s Club. She was a fifty-year member of Boone Chapter #290, Columbia Missouri Order of the Eastern Star and Past Matron in 1958. She was a lifelong Mizzou basketball and football season ticket holder and fan. Mary Alice also volunteered at Freeman Hospital in Joplin and was an auxiliary member.

Graveside services will be 2:00 pm, Friday, March 30th, at Ozark Memorial Park Cemetery. Reverend Joe Crosthwait will officiate. The family will receive friends from 1:00 pm to 1:45 pm Friday at the Mortuary. Contributions may be made to The University of Missouri Columbia Tiger Scholarship Fund in care of the mortuary.

Arrangements have been entrusted to Mason–Woodard Mortuary & Crematory.