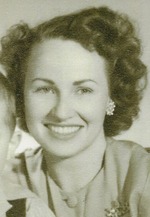 Dorothy was born on December 7, 1923 in Franklin Ks., the daughter of Garrett L. and J. Florence (Shell) Buckley. During WWII, she ground crystals for walkie talkies at Universal Television in Kansas City, Mo. as part of the war effort. She worked in retail sales at Newman’s, Kresge’s and Howsmon’s department stores. She was an active member of First Christian Church, Joplin, Mo.

Funeral services have been scheduled for 2:00 p.m. Monday, March 5, 2018 at the Mason-Woodard Chapel. The family will receive friends at 1:00 p.m. Monday prior to the service. Burial will be at Ozark Memorial Park Cemetery.