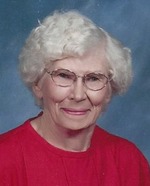 Virginia was born May 11, 1921 in Akron, Ohio to parents, H. Earl and Mary (Batton) Simers. She graduated from North High School in Akron, after which she attended the Goodyear Industrial University. Virginia then became employed as a secretary for the following fifteen years at the Goodyear Tire and Rubber Company. She was a highly valued employee before retiring in 1957. After working for Goodyear, Virginia became a homemaker, caring for her family. She has been a long-time area resident. Virginia was a member of Forest Park Baptist Church.

She married Guy Grafmiller in 1957, he preceded her in death in 2007. Virginia was also preceded in death by her parents, a daughter, Janet Mayne, and by two brothers, Bill and Bob Simers. Survivors include a son; James Grafmiller and wife Lisa of Senoia, Ga., a stepdaughter; Sonia Price and husband Michael of Akron, eight grandchildren and three great-grandchildren.

Services will be at 2:00 p.m. Monday, February 5, 2018 at Forest Park Baptist Church with Pastor John Swadley officiating. Burial will follow in the Ozark Memorial Park Cemetery. Visitation will be from 3 to 4 p.m. Sunday at the mortuary.