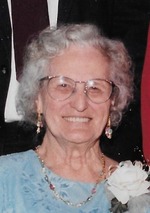 Elbie was born on June 20, 1915 in Wickes, Ar. the daughter of Archie and Anna (Sargent) Bailey. She worked as a secretary for Henson-Wilkins Roofing before retiring in 1980. Elbie was a member of the Leawood Church of Christ.

She married Junior “Buck” Greninger in 1946, they were happily married for 56 years before Buck preceded Elbie in death in 2002. She was also preceded in death by her parents, her infant daughter, Olive Paulette Greninger, and a sister, Merle Burkhart. Survivors include two sons; Lee Greninger and wife Janet of Joplin, Paul Greninger of Joplin, a daughter; Diann Miller and husband Melvin of Joplin, a sister; Jane Lloyd of Joplin, 8 grandchildren and 26 great-grandchildren.

Services have been scheduled for 2:00 p.m. Friday, January 26, 2018 at the Mason-Woodard Chapel. Burial will follow at Ozark Memorial Park Cemetery. The family will receive friends during a time of visitation from 7 to 8 p.m. on Thursday evening.