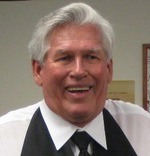 John was born on January 3, 1949 in Parsons, Ks., the son of Richard S. and Gladys (Groom) Monroe. John married Thelma Joan Humphrey on August 16, 1980 in Lamar, Mo., together they raised two children. He worked as a delivery person for a coffee company and as a housekeeper for Freeman Hospital. He was a member of North Main Street Baptist Church.

The family will have a private graveside service.