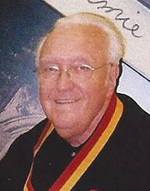 Leonard Allen Roten, age 88, of Joplin, Mo. passed from this life on Saturday, November 18, 2017. Leonard was born April 21, 1929 in Joplin to Charles and Gertrude Peck Roten. Leonard was a 1948 graduate of Joplin High School, and a1950 graduate of Joplin Junior College. He received his Bachelor’s Degree from Pittsburg State University in 1955, and his Master’s Degree from Southwestern Baptist Theological Seminary in 1957. Leonard served his country in the U.S. Army during the Korean War.

Leonard was preceded in death by his parents, Charles and Gertrude Roten. He is survived by a cousin, Paula Klotz and husband Dan of Douglas, Ks. He is also survived by a host of students from Alabama, and the Joplin area, many who answered the call to missions, and or church related ministry.

Services will be at 1:00 p.m. Friday at the Mason-Woodard Chapel with Pastors Richard Davenport, Steve Patterson, Robert Wilson, and Robert Davis, Allen Hendrickson, Keith Jackson, and John Pogue officiating. Burial will be at 3:00 p.m. Monday at the Ozark Memorial Park Cemetery. In lieu of flowers, memorial contributions are requested to a scholarship fund in his name at the Spring River Baptist Assoc., 4037 E. 7th. St. Joplin, Mo. 64801. Arrangements have been entrusted to the Mason-Woodard Mortuary of Joplin, Mo.