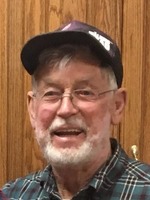 Jay R. Wood, age 76, of Webb City, MO passed away at 7:55 a.m. Thursday, November 2, 2017 surrounded by his family at his home following a courageous battle with cancer. Jay was born April 8, 1941 in Elk Valley, TN, the oldest of twelve children. Jay had lived in Webb City most of his life. Jay was employed as a laborer/cement finisher with Dalton-Killinger Construction Co. in Joplin, retiring in 2003. He was a member of the Laborers Union, Local 319 in Joplin.

Jay enjoyed camping, playing cards with family and friends and most of all he loved spending time with his grandchildren and great grandchildren, they were his heart. He was a devoted husband and loving father and papa. When people spoke of him the most words used, “He is a good man and the hardest worker I know.”

Jay enjoyed life with a smile on his face. He will forever be missed by all who knew and loved him dearly.

Graveside services will be conducted at 10:00 a.m. Monday at the Ozark Memorial Park Cemetery in Joplin. Arrangements have been entrusted to the Mason-Woodard Mortuary of Joplin, MO