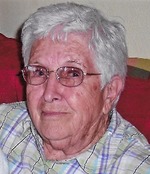 Maxine was born on July 5, 1920 near Seneca, Mo., the daughter of the late W.A. and Dora (Hesseltine) Douglas. She graduated from Wyandotte High School in 1938. She married Raymond Short on July 6, 1941 in Joplin and together they raised five sons. She was a devoted wife and mother. She was a member of 1st Baptist Church of Hinesville, Ar. She was an avid gardener and she enjoyed doing crossword puzzles.

Funeral services will be 10:00 am. Thursday at Mason-Woodard Chapel. Reverend Bruce Allen will officiate. Burial will be in Ozark Memorial Park Cemetery. Maxine’s sons and grandsons will serve as pallbearers. The family will receive friends 6-7 p.m. Wednesday at Mason-Woodard.

Memorial contributions may be given to the Gideons in care of the mortuary.